Hyderabad: At a time when everything from medicines to oxygen concentrators are being imported to save a huge number of COVID-19 patients in the country, an unemployed graduate from Telangana has come up with an interesting mask. Presently called as ‘Electric Nebulizer Mask’.

This unique mask has some interesting features and can be worn while on the move as well. 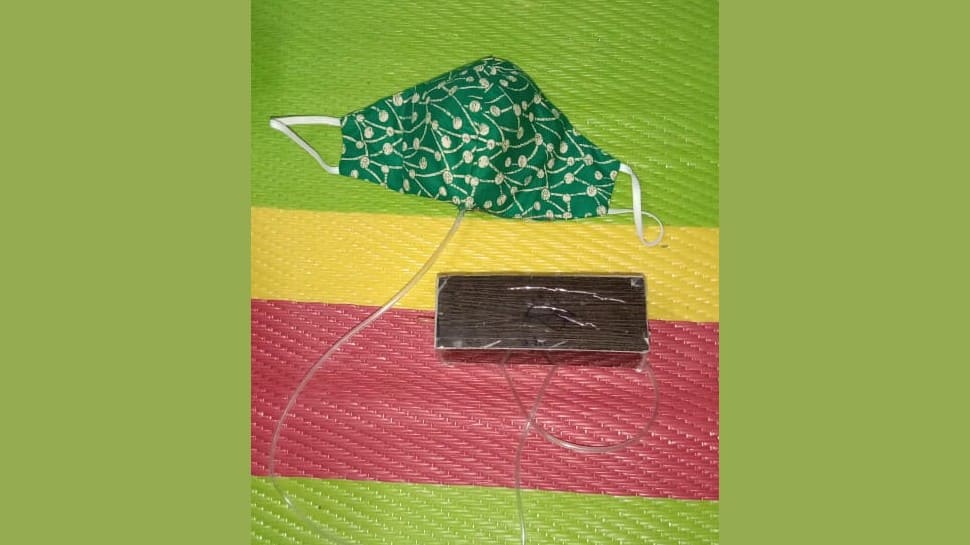 “The regular masks, although very useful, have some problems too. Like if you wear it for a longer period then there will be some discomfort in breathing. Then there is sweating issue and so on. But in our ‘Electric Nebulizer Mask’ we have an IV pipe and filters which stop dust particles and inhaling, and exhaling is bit comfortable,” explained Shiva.

Shiva wanted to become engineer but ended up being a B.Com ( Computers ) graduate due to various factors, including financial constraints given his poor background.

However, all these issues did not deter Shiva from making products on his own for larger good to society with the ‘Electric Nebulizer Mask’ being his latest effort.

The mask has a DC motor, circuits (of recharge module), air filter and if charged the battery back-up can run up to three hours. Apart from the present cloth mask, which is attached to it, the nebulizer weighs 400 grams and is 10 cms in length and 4 cms in width.

The making of ‘Electric Nebulizer Mask’ has an interesting background to it. One of Shiva’s friends P Naveen Kumar and his parents were infected with COVID-19 and while recovering the concept of this mask took shape.

“Two months back, my parents were down with COVID-19. My parents especially were feeling very uncomfortable wearing the regular masks. So, when Shiva came up with this idea, my sister Durga Bhavani helped design this mask while I and my parents would test wearing the ‘Electric Nebuliser Mask’ on an experimental basis. We all were very comfortable,” says P Naveen Kumar.

Coming up with a workable model was not an easy task for Shiva. Making of one “Electric Nebulizer Mask” comes up to Rs 630 as the entire amount would be spent on Nebulizers, IV pipes and filters.
“I had no money even to start working on this project. However, my friends Kiran Kumar and Anusha helped me and continue to do so as I am trying to improvise it by replacing the cloth mask which is connected to the Nebulizer with that ‘fibric plastic because for cloth we need to wash regularly but for ‘fibric plastic’ we can just wipe it with sanitizer,” added Shiva.

This is not the first time K.Shiva Nagaraju has made something different and unique on his own.

Earlier, after the Disha rape and murder incident in Hyderabad which shook the conscience of entire nation, Shiva made a stun gun which he named ‘Dandana’ for girls/women.

It is a shock gun which doesn’t damage or injure the person but passes good electric shock. It is to be used in times of distress by girls/women if they are intimidated or attacked.

He later improvised this as ‘Electric lathi’ for women constables. Shiva also made an electric bike and a mini tractor.

Surely, youngsters like K.Shiva Nagaraju need to be supported by all means and encouraged.