The action shifted to Miramar in the 3rd match of PUBG Mobile Pro League (PMPL) South Asia 2020 on Sunday. A, B, C and D were the comepeting teams again.

It was like a recap of the first match as OrangeRock and Fnatic clashed till the end moments again. But Fnatic failed to repeat the performance as OrangeRock held their nerves to registered their first chicken dinner of the day and week 2.

OrangeRock’s Mavi was adjudged the MVP of match as he registered 3 kills and inflicted 3 damages. His survival time was 23 minutes 54 seconds and he covered a distance of 6.09 kms in the match.

Table-toppers OrangeRock has extended their lead over second-placed GodLike. OrangeRock registered 7 kills and accumulated 27 points from the match, while runners-up Fnatic killed 8 and gathered 22 points. MegaStars finished third with 10 kills and 20 points. 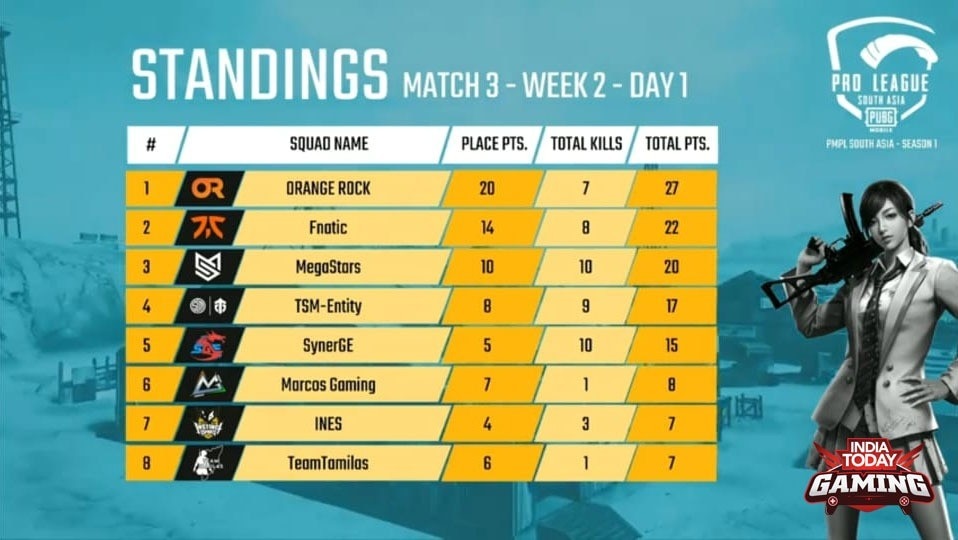 Team Hype and Tamilas’ dry run continued in this match as well and they got evicted with 7 and 2 points respectively.

Earlier today, Fnatic and IND registered wins in the 1st and 2nd match respectively. Fnatic showed a dominant perfromance and won with all its players alive.MegaStars gave them a good fight but were out-numbered in the end.

In the following match IND registered their first win by beating a strong Marcos Gaming team. IND in a dominant performance registered 9 kills and aggregated 29 points. Marcos Gaming the 2nd on the table in the match could register only 3 killls.

Moreover, Orange Rock has pipped GodLike in the overall points table. GodLike, who are scheduled to play only 1 match today, are 29 point behind MegaStars after the end of 3rd match.

PUBG Mobile Pro League (PMPL) South Asia 2020 will kickstarted on May 22 with top 20 teams from the region are battling for a massive prize pool and spots in the PUBG World League. Top teams from India, including India Today League PUBG Mobile Invitational winners TSM ENTITY are playing their trade at PUBG Mobile Pro League (PMPL) South Asia 2020 that has a total prize pool of $200,000. Teams have been split into 5 groups of 4 teams each.

The finals will be held over the weekend from 12 to 14 June.