Sunday’s second match of PUBG Mobile Pro League (PMPL) South Asia 2020 began with the same teams A, B, C, D but the location was changed to Sanhok.

The shocker came when table-toppers OrangeRock got eliminated on the 15th position and left the match open. Moments later, another big team SouL and Fnatic also got eliminated with 4 and 5 points, respectively.

TSM-ENTITY, Marcos Gaming and IND were the last 3 teams left in the team. All the teams were out of the circle with ENTITY closest to it.

But TSM-ENTITY could not capitalise and IND rose from behind to clinch their 1st win.

TeamIND’s slayer was adjudged the MVP of the match as he was successful in inflicting 4 kills and 583 damages. His survival time was over 24 minutes and he covered 5.45 kms in the match. Orange Rock though lost the 1st encounter but they pipped GodLike in the overall points table and now with 256 points. GodLike, who are scheduled to play only 1 match today, are just two point behind MegaStars.

TSM-ENTITY and IND follow Orange Rock and GodLike with 211 and 207 points, respectively. 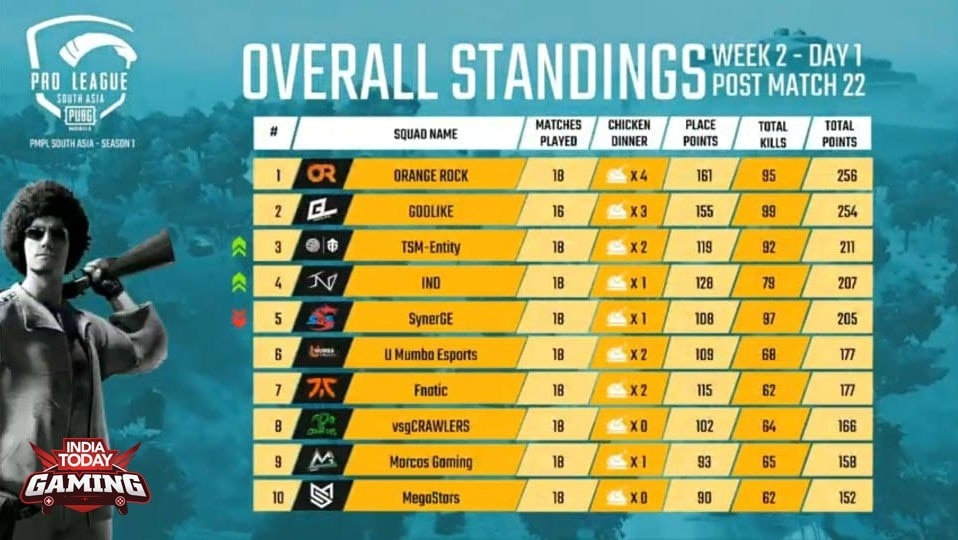 Standings after match 2 of week 2

Earlier today in the first match MegaStars and Fnatic came face to face in a nail-biting encounter. Mega Stars lost 2 players and in the next moment they lost another. This came a full squad Fnatic to win with all their players remaining. In the process Fnatic registered 9 kills in the match.

Owais was declared the MVP of the match he registered 4 kills and inflicted 711 damages. and survived for almost 27 minutes.

Fnatic finished with 29 points in the match and were followed by MegaStars (22 points and 8 kills) and and OrangeRock (14 points and 4 kills).

Orange Rock on Saturday had put on a masterclass performance to claim as many as three Chicken Dinners.

PUBG Mobile Pro League (PMPL) South Asia 2020 will kickstarted on May 22 with top 20 teams from the region are battling for a massive prize pool and spots in the PUBG World League. Top teams from India, including India Today League PUBG Mobile Invitational winners TSM ENTITY are playing their trade at PUBG Mobile Pro League (PMPL) South Asia 2020 that has a total prize pool of $200,000. Teams have been split into 5 groups of 4 teams each.

The finals will be held over the weekend from 12 to 14 June.

Get real-time alerts and all the news on your phone with the all-new India Today app. Download from