The Lakshadweep administration is engaged in the development of high-end eco-tourism projects at Kadamat, Suheli, and Minicoy Islands, officials said on Sunday (August 1).

A statement from the Lakshadweep administration said that it has proposed high-end eco-tourism projects in order to establish a robust base for maritime economic growth with tourism development as its core. 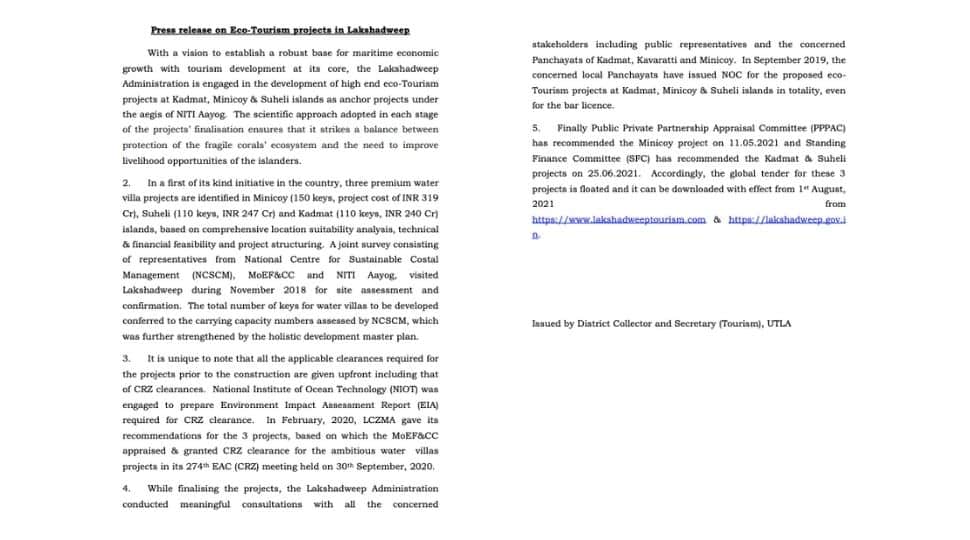 The projects are to be implemented under the aegis of NITI Aayog and taking into account the protection of the fragile coral’s ecosystem. Three water villa projects which are of the first in the country will be opened in the Islands.

National Centre for Sustainable Social Management (NCSCM), MoEF&CC and NITI Aayog have conducted a joint survey during November 2018 for site assessment and confirmation.

Lakshadweep administrator, S. Asker Ali, (IAS), told IANS: “All the mandatory clearances are given for the projects are given upfront including the CRZ clearances.”

He also said that the National Institute of Ocean Technology (NIOT) was engaged to prepare the Environment Impact Assessment (EIA) report which is required for CRZ clearance.

The administrator said that before finalizing the projects, the administration has conducted meaningful consultations with all the concerned stakeholders including public representatives and the concerned panchayats of Kadamat, Kavaratti and Minicoy. The local panchayats concerned have issued NOC for the proposed eco-tourism projects at Kadamat, Minicoy and Suheli islands in totality even for bar license in the project.

The administrator said that Global tenders for the three projects have been floated and can be downloaded with effect from August 1, 2021.

Delhi govt directs all state-run liquor shops to stock up

Costco brings back purchase limits on toilet paper and more

Delhi govt directs all state-run liquor shops to stock up

US says window open for Iran nuclear talks but won’t be...