The crucial meeting of the Working Committee took place amid divisions in the party over the leadership issue. A group of 23 party leaders wrote a letter to Sonia earlier this month seeking an overhaul of the organisation. The letter, however, was criticised by Rahul and few other party leaders.

Former union minister Kapil Minister, who was also part of the group who raised concerns about the leadership and signed the letter, took to social media with a blistering response to Rahul’s ‘colluding with BJP’ allegation, writing, that he had been defending the party for 30 years.

“Rahul Gandhi says we are colluding with BJP. Succeeded in Rajasthan High Court defending the Congress party. Defending party in Manipur to bring down BJP Government. Last 30 years have never made a statement in favour of BJP on any issue Yet ” we are colluding with the BJP !” Sibal tweeted. 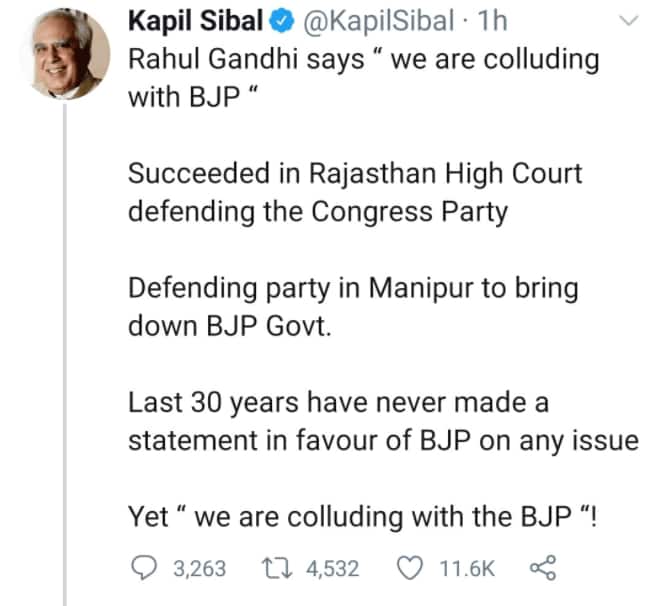 He, however, later deleted the tweet after receiving clarification on Rahul’s remark. “Was informed by Rahul Gandhi personally that he never said what was attributed to him . I therefore withdraw my tweet,” Sibal shared on Twitter after deleting his previous post.

Congress’s Randeep Singh Surjewala rejected the news reports that claimed Rahul had said anything like this. “Rahul Gandhi has not said a word of this nature nor alluded to it. Pl don’t be mislead by false media discourse or misinformation being spread. But yes, we all need to work together in fighting the draconian Modi rule rather than fighting & hurting each other & the Congress,” Surjewala said in response to Sibal’s tweet. 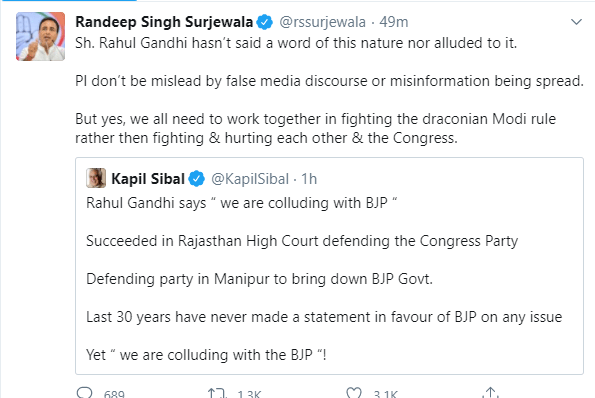 Sources added that Rahul in his speech questioned the timing of the letter, signed by 23 Congress leaders, and sent to Sonia while she was at Delhi’s Gangaram hospital and under medication. “It is the CWC and not the media where we put out our thoughts and discuss,” he is learnt to have said at the meeting, the sources said.

The party is divided on the leadership matter with a section demanding collective leadership and another reposing faith in the Gandhi family.

At the Congress Working Committee, Sonia, the interim Congress President, offered to quit, asking the  to initiate the process for selecting a new party chief, sources said. In her opening remarks at the meeting, called in the wake of a section of leaders seeking a ‘full time and visible’ Congress president, Sonia made the offer to quit saying she had given a detailed reply on the issue to AICC general secretary K C Venugopal.

Sources said Sonia Gandhi referred to Azad and others twice during her brief address and the issues raised by them. She also handed over a detailed reply to Venugopal, who read out its contents at the CWC meeting in which Gandhi sought to be relieved from the post.

Former PM Manmohan Singh, who spoke after Sonia Gandhi, urged her to continue, so did former Defence Minister AK Antony, with both the veterans criticising the letter by some party leaders, including Ghulam Nabi Azad, Anand Sharma, Mukul Wasnik, who are a part of the CWC, the party’s highest decision-making body.

On the other hand, Rajasthan CM Ashok Gehlot and Chhattisgarh CM Bhupesh Bhupel demanded the CWC to annoint Rahul as the full-time party president.

Ghulam Nabi Azad praises PM Narendra Modi, says THIS about him at an event in Jammu | India News

Here’s how to register for COVID-19 vaccination on Co-WIN 2.0 portal | India News

Iran dismisses idea of talks with EU and US to revive...

Dow futures rise 100 points ahead of first trading day of...

Iran dismisses idea of talks with EU and US to revive...